A little about Churros London

Churros are traditional Spanish food, though the origin is unclear. Some said the Portuguese brought them to Europe from China; many believe that they originated from the Spanish shepherds living high in the mountains.

In Spain, churros are very popular for breakfast, snack or dessert. Traditional churros con chocolate is served with thick hot chocolate, while churros with café con leche are also a popular choice.

We started making churros in Camden at the beginning of 2011, adapting tradition to the local taste.  In addition to the typical churros con chocolate, we have adopted the South American style offering optional toppings such as cinnamon sugar, or dulce de leche (toffee); Belgian chocolate and ice cream are also available.

These little fellas are cooked in crystal clear sunflower oil at 200 degrees for a minute or so, for a perfect crispy-fluffy finish; the dough is 100% vegan. Please note that our optional toppings do contain milk, we thank the cows for helping us making our churros even yummier, gracias vacas! 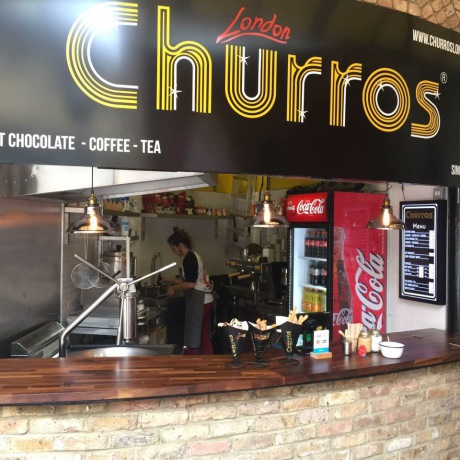